A Tryst with a Tadka Taco 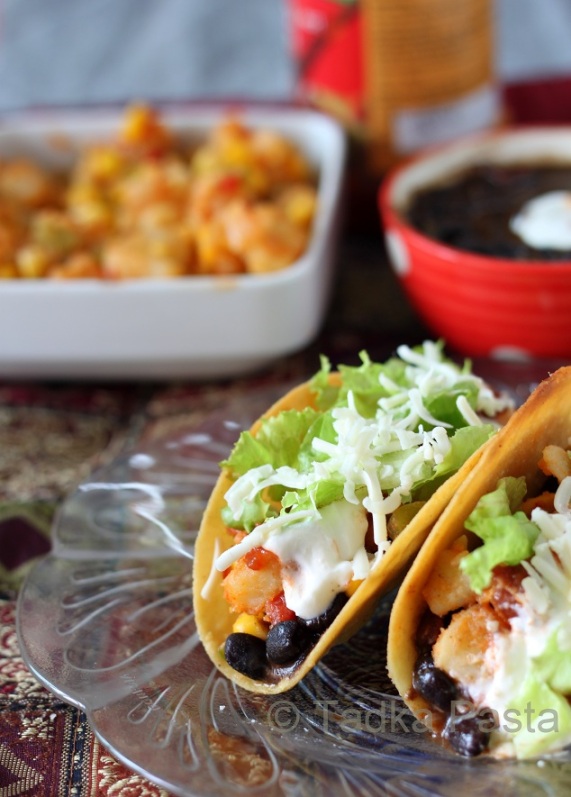 Summer brings forth a legion of tasks and travails for the already overworked Mom. The activities on the calendar are almost prismatic in their appearance, overlapping blocks of color and date sending her into a dither. The choice of groceries, while abundant – what with brimful Farmers’ Markets abound – is as confusing as the prismatic calendar. The same colors and flavors colliding with one another, on the grill, in the freezer, in the oven and over the stovetop. The happy campers request for eats of all order and ilk at odd hours and dishing them out requires not just extraordinary culinary ingenuity but a heightened sense of resolve and endurance to think-outside-the-lunch-box.

One such endeavor is a Tex-mex taco pocket filled tastefully with a freight of indigenous trimmings and trappings. While the shreds of lettuce and tomato stick to their rightful places from the original, the potatoey hodgepodge that waddles its way into the picadillo’s pad doesn’t make it anymore convenient for ravenous mouths to get a bite that doesn’t splatter over. And the Mom..well she’s just glad there’ll be enough silliness in the form of sourcream cowlicks to capture for her summer album. But of course in the midst of this taco titillation she’ll remember to steal a shell or two for herself before it’s all gone..and the pack attacks her for a new snack.

Warm and crisp up the taco shells as per the instructions on the box. Arrange a Tadka Taco buffet with the shells and bowls piled high with the filling and an array of fixings. For convenient dispensing of the sour cream, put it in a zip-top bag, snip off an edge and let people have fun squeezing it onto the tacos.

For the Veggie Filling

Warm the oil in a large pan/kadhai and sweat the onions, garlic, bell pepper and jalapeño on a low heat until soft, about 5-7 minutes. Toss in the spice mix and salt and toast for a few seconds. Stir in the potatoes, corn and beans, cover and cook until the veggies are cooked. Turn off the heat and sprinkle the herbs.

Our tacos are taking a trip to –

14 Responses to A Tryst with a Tadka Taco