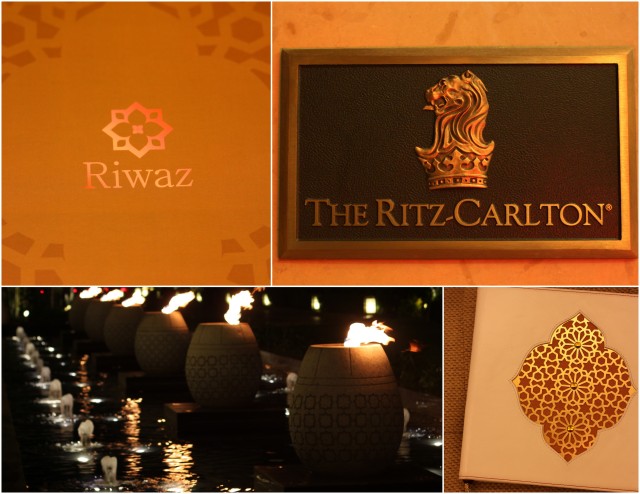 There’s really nothing we enjoy better than a grand Indian meal, especially when it’s been done right – classic dishes, true to their roots, but with a twist or two to add a spark and lift them out of the humdrum. Riwaz, at the swanky Ritz-Carlton, Residency Road, Bangalore pretty much knocks it out of the park with its signature specialties based on the cuisine of the North-west frontier of India. Located on Level 4 in the first and at present, only Ritz-Carlton hotel in India, this classy restaurant opens only for dinner. We picked a balmy Sunday evening to visit this beautiful property at their invitation and enjoyed every bit of the meal and the ritzy experience.

After being greeted warmly by the staff at the entrance we headed upstairs to the restaurant, having gotten only a fleeting glimpse of the grandeur and charm of the hotel. The entrance to the restaurant is dominated by a glittering wine ‘enoteca’, which, the good dictionary tells us is an Italian word used to describe a repository for wines. There are a couple of tables in this area devoted to wine and whiskey tasting, perfect for spending a leisurely evening with friends, if you are so inclined, before heading to the main restaurant area for dinner.

The ambiance at Riwaz is modern and elegant, the decor is understated, perhaps to allow the kitchen and the food to take centre-stage. The highlight of the interiors is the sparkling open kitchen that seems to operate almost too peacefully considering the complexity of the delicacies they were dishing out. Three barrel-like, gleaming tandoors have the chefs bustling around them, armed with the traditional red-checked cloth pads for pasting breads to the sides of the oven, long skewers to retrieve them and wicked-looking seekhs for kababs.

A bevy of tables in white, beige and silver, and two lavishly appointed but cozy private dining rooms completes the scene. The hostess mentioned the theme of Indian jaalis or mesh-work that runs through the hotel and we saw it echoed in the screens here, the menus and later, in the garnishes that the chef created. Ably holding fort in the kitchen was Chef Ramandeep, the designer of the complete Riwaz food experience and we were fortunate to have our meal planned and crafted by him personally.

We settled down at a table right next to the open kitchen and started out by selecting our drinks. The restaurant’s beverage menu includes several cocktails and alcohol-free options inspired by indigenous spices and other ingredients. We tasted the Sweet and Spice, a green concoction with the fresh coolness of coriander leaves and the lemony notes of coriander seeds. Nectar, with pomegranate juice and whiskey was smooth and interesting as well. Both the drinks that we tried were very mildly sweetened, and complemented the food nicely. Alongside we were served a light amuse bouche – a dahi vada bite adorned with a dainty pastry ring.

We had left the choice of dishes to Chef Ramandeep and he obliged by selecting for us an interesting trio of appetizers. These were served with a bowl of vegetable crisps and a salad with chilli dressing. The Sunehari Jhinga (one of Chef’s signature dishes) – jumbo prawns with a delicate marinade of yogurt and saffron – was light and delightfully juicy and did not last long on the platter. Minced herbs, ground nuts and perhaps a hint of pomegranate made the Seekh Kebab Kandahari, which is a Pashtoon staple, a rich and flavourful treat. The third kebab was a ghee-lavished piece of tandoor-cooked chicken, the Turra Kebab, made to resemble the crest of a turban or a cock’s comb! 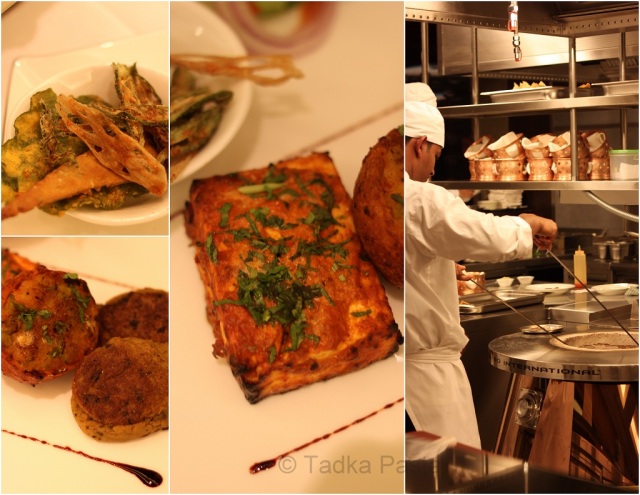 The vegetarian platter included a mild and velvety smooth Sabji aur Gucchi di Galouti, a delicious meat-free avatar of the popular kabab that is usually made with ground meat. The Chef suggested that we eat bites of these patties alternating with the vegetable crisps (lotus root, spinach and okra) for a contrast of textures. Accompanying this was a drizzle of beetroot chutney that was meant to provide a change from the ubiquitous green chutney that is usually served with kababs.

If you love garlic then the multi-layered Tehdar Paneer Tikka with a minted garlic stuffing would be a good choice, though it was a tad too garlicky for our liking. We did like the Bharwan Tandoori Aloo with its stuffing of raisins and peas, all wrapped in a tandoori masala and grilled to a crisp tenderness.

The spread laid out by the chef for our main course had us truly bedazzled. The superbly-spiced Baluchi Raan, lavished with beaten gold leaf was a star, as was the gorgeous Lobster Masala. At over Rs. 1700 per portion these are also the two most expensive dishes on the Riwaz menu. The raan or leg of lamb is marinated overnight and then slow cooked in the tandoor, a long process that results in the most delicious and tender chunks of lamb on your plate. This is lamb with a melt-in-the-mouth texture that you’re really not going to get with another method of cooking.

The Lobster masala had a lot going for it apart from the dramatic presentation. We’re not huge fans of drowning quality seafood in heavy masalas and sauces but this dish did work. The lobster chunks were soft and succulent and the gravy was mild and complementary.

The haleem served by the chef was a little out of place amidst the grandeur of the other two dishes, but deliciously so. Its down-home flavours were soothing and we could add our own toppings of diced tomato, caramelised onions and herb chiffonade for added flavour.

Our vegetarian pick of the day was the Dal Makhani, which Chef asserted is the best in Bangalore. Well, we’re not playing the numbers game, but it was definitely a very appetizing preparation and we found ourselves going back for bites of dal after tasting the other dishes. The Kandahari Bharwan Gucchi Sabj had meaty morel mushrooms from Kashmir and we savoured this rare delicacy. Another dish served was the Bharwan Kofta, the koftas here could be softer, perhaps they were not heated through. Sarson ka saag is a winter specialty of the region and it was served with juliennes of ginger and the traditional accompaniments of ghee and jaggery.

Even the most down to earth curry or basic dal tastes delectable when scooped up with hot-off-the-heat bread. Left to us we would have opted for the simplest tandoori rotis to counter the rich creaminess of the curries. But it seemed that Chef Ramandeep was in a mood to pamper us. Three bread baskets with a mind-boggling assortment of fresh rotis had us scrambling to taste each one while they were still warm. The Chef’s signature bakarkhani was yeasty and satisfying, as was the Rogani naan. Peshawari kulcha, khasta roti, missi roti..we loved them all. There was even a special tandoori parantha (pictured in the centre above) that was to be paired with the lobster dish – this was delicately flavored with star anise and herbs.

Just when we thought we could not eat another morsel, the dum biriyanis made their appearance. They were beautifully presented, with a crispy layer of pastry sealing the top, that was then garnished with chopped herbs and melon seeds. The pastry was cut and folded back with appropriate ceremony and then the rice was served up. We could only manage a spoonful at this point but could imagine heading back to Riwaz after a few days to appreciate this dish better.

The dessert platters were quite spectacular and thankfully did not have the heaviness that traditional Indian desserts are usually associated with. The saffron and pista sandesh is always a favourite and this was one of the best we’ve eaten. The Riwaz Belgian chocolate and cardamom pudding served in an earthen cup was warm from the oven and the molten chocolate concoction was luscious indeed.

The garnish of a graceful mesh made from crisp pastry brought back to mind the hostess’s comment about the jaali theme running through the hotel. And a special mention must be made for the pyramid of saffron ice cream. This had been placed on a crust that tasted like a katli, then covered in a shower of soan papdi and finished with a heavy coat of beaten silver. Accouterments aside, the saffron ice cream itself was superb, and we’d suggest that the chef add it to the dessert menu. 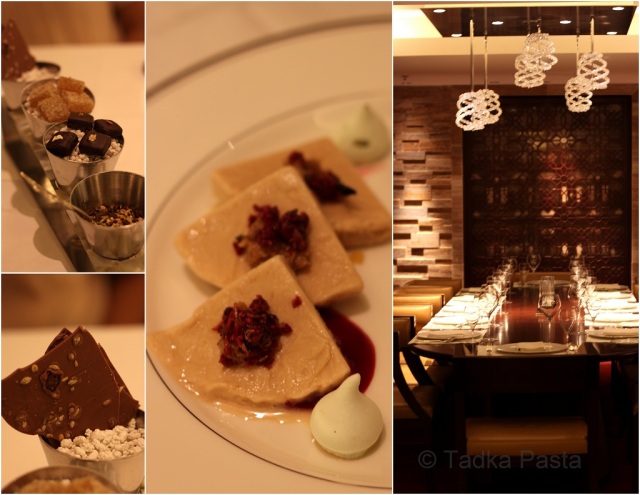 The triangular slices of a refreshing pan kulfi (pictured in the centre of the above collage) were garnished with a dry pan mixture that made it the perfect meal-closer for any pan fanatic. Served with the kulfi were tiny anise-scented meringues to add a sweet crunch. Flavoured chocolates and jellies were offered to end the meal, but we were so full that we could only admire these and take pictures.

The restaurant absolutely lived up to its claim of serving great dishes inspired by the North-west. We thoroughly enjoyed the best of Riwaz put out for us by Chef Ramandeep and will remember this meal for a long time. A word for the excellent service at the restaurant, which was warm, friendly and attentive. We also liked the interesting anecdotes behind some of the dishes which were narrated to us by the chef and can also be found on the menu itself. We’d recommend that you head to Riwaz for that special occasion, to savor their Indian-inspired drinks, perfect kababs, curries and amazing desserts.

5 Responses to Restaurant Review: Riwaz at The Ritz Carlton, Bangalore