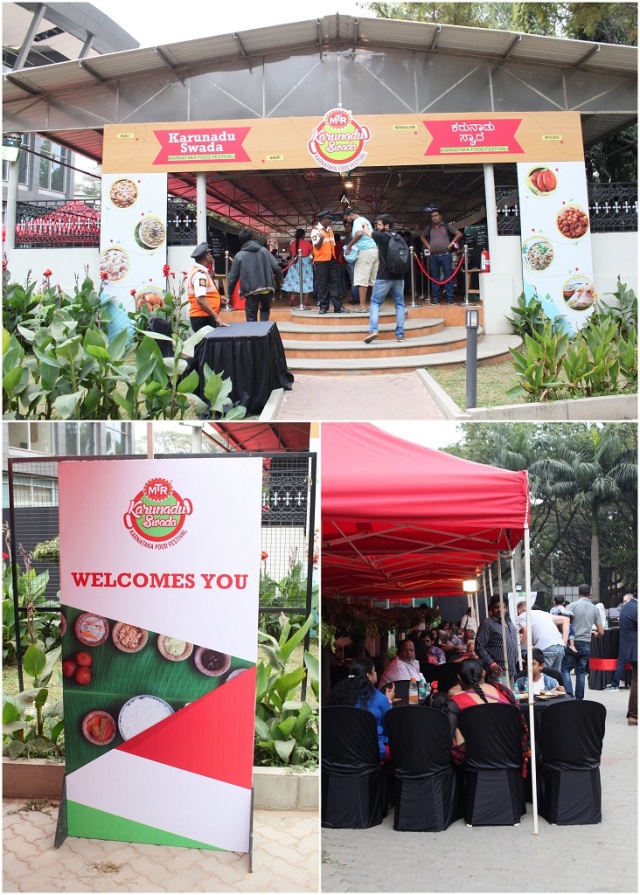 Karunadu Swada, which translates into The Taste of This Great Land – evokes a feeling of blissful homecoming in any Karnataka resident. This is truly the land of many tastes. Go to different parts of Karnataka and you’ll come across foods that are not just delectable, but also very distinct in flavours and textures. Here’s a glimpse into the recent (Jan 21-22) food festival organized by MTR, at the St. John’s Auditorium in Koramangala, where over 100 dishes unique to Karnataka cuisine were up for grabs.

The Tulunadu or coastal regions of Mangalore-Udupi are known for their partiality to coconut and dishes that are cooked in really exclusive ways. Sometimes, wrapped in leaves and steamed, and sometimes, simmered on low heat for hours to get the right balance of spice, heat, sour and sweet.

If you were to randomly sample little bites from across regions, some of the dishes that would stand out would be: the Moode Kadubu from the Mangalore region – idlis wrapped in Moode leaves and steamed, the tiny dollops of buttery goodness in Benne Kadambuttu (steamed butter dumplings) from the Coorg region, the somewhat-crispy, somewhat-tender Matvadi Palya – made with ground lentils and cluster beans, typically from the Bangalore-Mysore regions and the Khar Byali, a toor dal based curry from the North.

You can’t get past the ragi rotti or the obbattu counters without tasting some! There were at least 3-4 varieties of side dishes, including chutneys, that you could dunk the hot pieces of rotti into, and the soothing effect of the pasty, sweet filling in the obbattu is something else. We went back for second servings of the obbattu, especially after licking up the last of one lip-smacking but fiery hot chutney or another.

The chutneys of North Karnataka warrant a chapter unto themselves. There was a green chilli chutney, which could’ve set the fire alarms ringing, a red chilli and garlic chutney that was tangy and delicious, a dry peanut chutney and a wild til chutney powder, too. We couldn’t have enough of these and would gladly have asked for “to go” portions if such a thing was permissible! There were so many other goodies at this counter – one of our absolute favourites. There was the chilli bajji (with the hottest variety of green chillies, replete with seeds!), jolada rotti with a donnekayi (capsicum) curry. We couldn’t help but marvel at the tenderness of the whole capsicums used in this dish – the skins were almost paper-thin and the flavour of the vegetable perfectly complemented the spiciness (not spiked with undue heat) of the gravy. We could discern the taste of peanuts and garlic in the masala and were happy to ask for several helpings of just the curry, to which our friendly servers obliged with smiles that stretched from ear to ear! 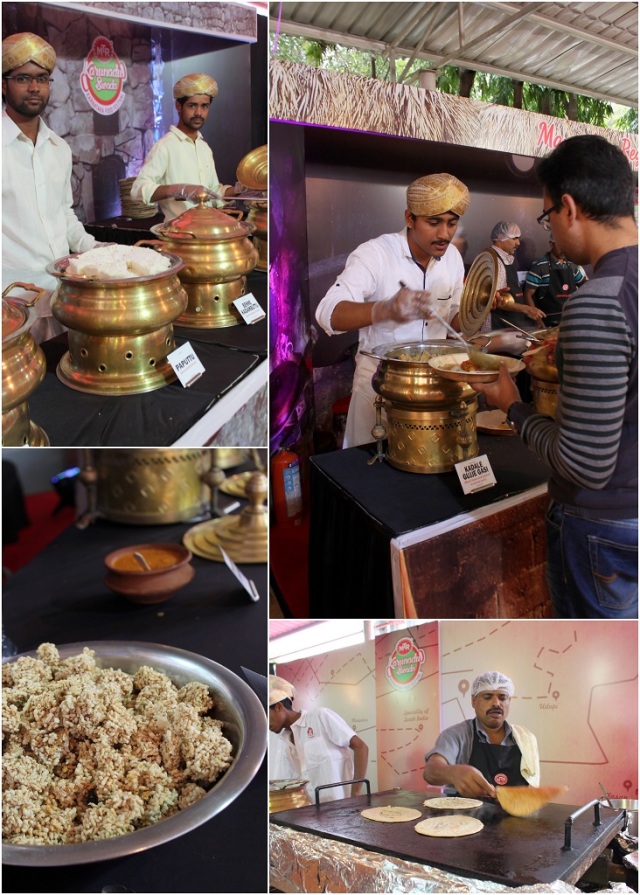 Paputtu is a lovely dish from the Coorg region, made with coarsely ground rice flour, coconut, milk and sugar, with hints of cardamom. Not very unlike the puttu from Kerala, it is great as a breakfast or snack and is quite filling. Kadale Gassi or Bean Curry is from the Mangalorean cuisine, which could, in fact, pair very well with the Paputtu!

Who can stop with just one Sandige from our own Bengaluru? These crunchy fryums are made from paddy puffed rice, grated potatoes or white pumpkin/ ash gourd, green chillies, etc. They are ceremoniously made in large batches during the summer and sun-dried until both sides are completely brittle, then stored in airtight containers for use throughout the year.

And of course, no one can resist the MTR masala dosa! Crisp and crackling, with the chutney smeared inside in a stroke of genius, and filled with just the right amount of potato masala, then topped with with creamy butter that hisses its way along the sides.

Here is a small sample of the platefuls of food we relished! We went back for seconds and thirds so many times that we lost count!

The dessert counter was filled with plenty of delicacies, ranging from dry fruit laddus to Dharwad pedha, banana payasa and hayagreeva. We also loved the haalubai!

Our most enjoyable part of the whole set-up was the live demo of special Mangalore delicacies by renowned food historian and author, Chandri Bhat. She was a bundle of unending energy as she stirred and mixed ingredients with the skill of a magician, before assigning sous chef duties to her equally wonderful helper. She told us so many stories that there were moments when we almost forgot about the food. The keyword being – almost!

One of her signature savoury dishes was Potato Saung, made with onions, potatoes, and cooked tender cashews, simmered in a wonderful and really simple masala. It is typically eaten with Neer Dosa.

The sweet dish: Bot Nevri Kheeri, as she said, is nearly extinct! A painstaking and time-consuming labour of love, it is made with mini rice flour dumplings filled with a coconut and jaggery mixture, then dunked in a lovely coconut milk and jaggery base, or kheer. We couldn’t have enough of this, but we also knew better and saved some appetite for yet another round of the chutneys at the North Karnataka stall.

We had a great afternoon, immersed in food and culture, both of which often reflect in our own work: whether it’s for recipe ideas or workshops. We believe that food and culture are two sides of the coin that makes our lives richer and fuller. Everything one needs to know about a particular section of the society, one can learn from its food and the culture of its people. We certainly hope MTR comes back next year with version two of Karunada Swada!